Ahoy matey, we have a great playground!

Pirates Cove Playground has a huge pirate ship for buccaneer & swashbuckler adventures. The ship is heading out to sea escorted by a spring mounted dolphin and a seahorse to ride on.  Behind the ship are rocks and cargo nets to climb and a water adventure island.

The island has 3 turning cannons that shoot water while a ship’s mast and palm trees shower kids with more water!  The water is on from 8:00am to 9:00pm, weather permitting, as long as the temperature is above 72 degrees. Start the water feature by pressing the silver button on top of the green post activator (it looks like a green fire hydrant) the water will run for 10 minutes, and then shuts off until someone touches activator button again. There are sling swings and a tire swing too. We didn’t forget the little pirates; we have a slide climbing station and swings for toddlers ages 2 to 5. 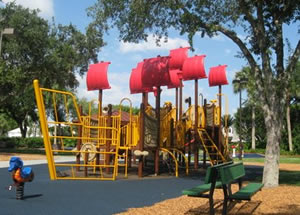 Innovative and challenging, the other side of the playground is an interactive computer controlled design.  Technology combines the excitement of digital gaming and an outdoor playground. We have four stations.

Players compete to beat the clock in 4 dynamic games testing player’s agility, memory and speed.  The LED flashing Game Nodes are placed at strategic positions around the structure with the Game Controller setting the stage.  Hit the lighted nodes as fast as you can, using teamwork to your advantage.  Each game adds new dynamics to every challenge.

Playing is performing on the three different Swirl games. Swirl is about spinning, climbing, and gaming for kids at all levels and abilities.  The trick is to control the spinner and not be controlled by it. This calls for speed, focus and agility. The Nodes are activated  by turning the Spinners and players have to hit 'em first and fast to win.

The three Nova games call for speed, quick reflexes and constant strategy.  Every Nova game challenges your balance and muscle power as you try to gain an advantage over your opponents. Nova’s system reads the direction and speed of the ring making the players control both to win.  Kids must demonstrate expert co-ordination and maintain a firm foothold to secure their position both on the ring and in the game. Gamers can play against the Nova or compete in teams. 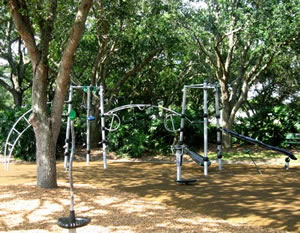 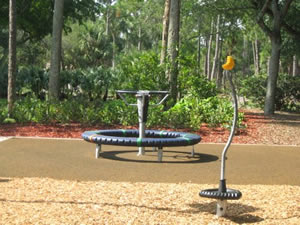 Rocky can be a wild or mild ride but players need to be ready for both.  Rocky’s three unique games will require everything from raw strength and power to fine-tuned balance.  Rocky reads the angle and direction of the platform, so players influence the games with every movement of their body.  Alone or in teams, the more force that’s applied, the more control you get back from Rocky.

The playground is a bouncy, cushioned, poured-in-place surface. Please, no cleats or heels!

There are restrooms and picnic tables on the playground for your convenience. These picnic tables cannot be reserved but are available on a first come first serve basis.