To purchase a permit, applicants must provide documentation proving residency and vehicle ownership.

Permits are effective yearly from October 1 to September 30.  Fees are not prorated. 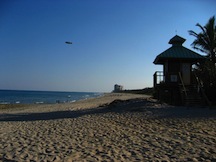 City Residents
Ownership of South Beach, Red Reef and Spanish River Parks is held by the City. City residents are allowed use of all three parks for one permit cost of $62.00 (tax included).

Beach and Park District Residents
The City of Boca Raton owns the Red Reef property, and the Beach and Park District provides all funding for operation and maintenance.  This agreement allows the district residents to use South Beach, Red Reef, and Spanish River Parks for one permit cost of $62.00 (tax included).

County Residents
Residents of Palm Beach County may purchase a permit for South Beach Park only, through an agreement between the City and County. The City is responsible for all operation and maintenance, with the provision that County residents be allowed usage of the Park at the same rate as City residents, $62.00 (tax included).

Replacement
If you should trade or sell your vehicle, OR have your windshield replaced, you must SCRAPE the permit from the windshield and return it with your receipt and new car registration.  Permits that are stolen or lost will not be reissued.

Credits
Credit can be given for one (1) daily park entrance fee per vehicle towards purchase of annual pass.  Payment must be made by residents within 30 days of dated receipt, ONLY if you are eligible to use that particular park.  In order to obtain a credit, return the original park entrance receipt when applying for your permit.  You may get a credit only at time of purchase.